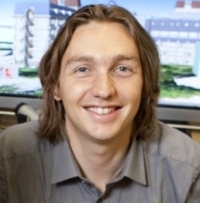 Raphaël Grasset is a technical fellow at PTC.

He is a recognized AR/MR/XR expert, both in term of research and development. He has has been working on 50+ multidisciplinary industrial and academics projects (development/research/leadership), supervised a significant number of R&D teams (developer, research staff and 50+ students), author of more than 50 international publications and hold patents in the AR field.